ABC Nightline Highlights the Work of the Planning Council

Posted in News | No Comments

On a small stage in Savannah, Georgia, an officer with the city’s police department puts his improv skills to the test Wednesday in an acting class. In part, the class was meant to teach the students about observational awareness while also fostering community relations.

Anthony Watkins is an officer with the Savannah Police Department who took part in the class. The improv drill asked participants in the class to pretend they’re on a bus and to mimic the bus driver’s overly theatrical behaviors.

“I think as far as what I’m learning today, this is just not my comfort zone,” Watkins told “Nightline.” “Even being in this class for a short time today is just kind of pushing me to work and operate in a way that I would never have thought of before.”

The exercise, which requires participants to observe the driver and act on social cues, made Watkins feel stressed, he said. But he also sees the benefit of being taken out of his comfort zone.

“I think, as police officers, we’re always taught to be that authority … figure that is taking charge on scene and wanting to move in one specific direction,” Watkins told “Nightline.” “[The training] is kind of important to break us out of our comfort zone to where we can really achieve a personal connection. … Once you have that personal connection, it kind of creates a bond where a more peaceful resolution could be achieved.” 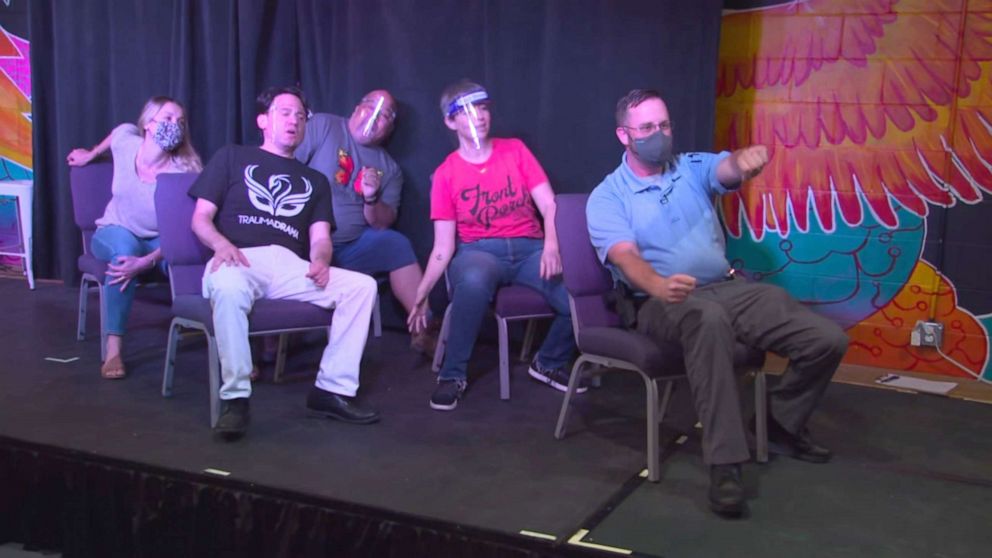 Watkins took part in the training amid a week of protests following the death of 20-year-old Daunte Wright. Wright was killed during a traffic stop in Brooklyn Center, Minnesota, just miles away from where George Floyd died last year and where his accused murderer, ex-police officer Derek Chauvin, is currently standing trial.

Wright, a father to a 2-year-old boy, was killed Sunday by Brooklyn Center police officer Kim Potter, who claimed she’d mistaken her handgun for a stun gun during the stop. Potter, along with Brooklyn Center Police Chief Tim Gannon, submitted their resignations Tuesday. On Wednesday, Potter was arrested and charged with second-degree manslaughter.

As Wright’s death tears open old wounds, some police departments have been working to change the way their officers approach their jobs and the lives they’re entrusted to protect and serve.

University of Maryland Professor Rashawn Ray focuses his work on police relations with the community. He says that a lot of police are often trained more for use-of-force situations when they’re more often called for situations related to “the exact opposite.”

“Nine out of 10 calls for service have nothing to do with violence at all,” he said. “As we’ve seen of late, and with more video evidence, we are oftentimes seeing police officers escalate situations themselves, making them more violent and aggressive than they should be. So, what we have to do is create training that speaks more to social interactions, speaks more to officers creating what they call ‘time and distance’ so that they can make more objective decisions instead of simply relying on playing up tactics.”

Vira Salzburn, of the Chatham County Safety Net Planning Council, organized the training program that Watkins participated in for the city of Savannah. She said the intention of the program is to bring local officers together with behavioral health providers and school employees so that they can all understand each others’ roles and the people they work with on a daily basis.

“Having law enforcement involved in our community work, doing this grassroots work, is so beneficial for going from otherness to togetherness, and really cultivating the sense of compassion for each other, recognizing joys and sorrows that we may experience as a community,” Salzburn said.

The class is part of Watkins’ training in the Savannah Police Department’s Behavioral Health Unit. The department’s chief, Roy Minter, said the unit was launched after a review found that 3,700 calls from 2019 were not related to criminal acts but rather mental health crises.

“We realized, going through those calls for service, that what was really needed … was for those individuals to be evaluated by a clinician, to be connected to resources … and for them to have the opportunity to have some type of follow-up plan put in place to reduce recidivism for those types of calls,” Minter said.

Ray said a disproportionate amount of people who are ultimately killed by police are not only Black but also dealing with a mental health issue.

“The issue there is that in most police departments around the country, not only are they not trained in de-escalation and social interactions as they should be, but also they receive very little training on mental health identification,” he said.

Savannah Police Department’s Behavioral Health Unit was created with the intention of enhancing the department’s understanding of mental health. It’s comprised of two non-uniformed officers, unarmed officers and a licensed clinician. None of them wear a typical police uniform.

People with untreated mental illness are 16 times more likely to be killed by law enforcement, according to the nonprofit Treatment Advocacy Center. The Savannah Police Department said its Behavioral Health Unit has enhanced its police services while also reducing the need for unnecessary force.

“There are several situations that I’ve experienced since being on the unit, and even before being on the unit, where there’s a contrast,” Watkins said. “Prior to having the behavioral unit, you would take the person to jail, and now we have more options. When we tell [people] that we’re taking a person in for treatment or taking a person to a mental health facility rather than jail, most often than not, they’re pretty happy with that.”

Savannah Police Department Detective Patrick Skinner has been working to change officers’ mindsets for years. He said it’s a conversation that has “become more open and urgent” and that many officers operate at a baseline of fear and caution.

“If I’m afraid that I’m going to be murdered at every single second of the job and I’m always operating in what they would call ‘code red,’ I’m always on high alert, that is toxic mentally. It’s toxic physically,” Skinner said. “It’s also toxic to the profession of community policing. If I’m afraid of my neighbors, then I’m going to react fearfully.”

Before working in Georgia, Skinner spent seven years working for the CIA’s Counterterrorism Mission Center in the Middle East. During his time in the Anbar Province of Iraq, he said they fell short with gaining the trust and cooperation of the Sunni community — an issue he was able to draw parallels to in Savannah.

“When I came home to Savannah and I started seeing that same rhetoric here where you get the community on your side — ‘We need the African American community; we need the Hispanic community on our side’ … I could understand quickly that it doesn’t make any sense,” Skinner said. “That’s impossible. You need to do it day by day, individual by individual.”

As a police officer, Skinner has been outspoken about what he’s seen in his community, even speaking out in articles and on social media about community policing and the importance of being a “neighbor.” One idea he’s tried to instill within the department is that the term “civilian” creates a divide between cops and the people they serve.

“The words we use are very reflective of the thoughts we have. … I understand that you’re trying to say people that are not police,” he said, adding that calling people civilians pits them against cops, even if it’s subconsciously. “It also says that the cops are military because by definition, you have two choices, civilian and military, and we are not military.”

Skinner said that incorporating simple behaviors, like calling the person who called 911 or driving with his windows down, have made differences in his ability to police effectively and humanely.

“The openness is the power,” he said. “I would just call someone and say, ‘Hey, I’m officer Skinner heading to your address.’ Whatever the call is, [I’d say], ‘Is everything OK?’ And most of the time they would tell you that the call was not as dramatic as it seemed.”

On keeping his window down, he said, “Because of my old jobs, you were always supposed to wave to people because it told them two things: It told people that you were looking at suspiciously that, ‘Hey, he sees me.’ It also told everybody else, ‘Hey, he sees me in a positive way.'”

Skinner said he waves at everyone because he wants them to see he’s engaged. He’s looking for the “briefest connection,” he said.

“There are no small acts of kindness or connection, and we just need to not pass them up,” he said. “The windows down was an easy thing.”

It’s this momentary connection between a police officer and his community that Skinner hopes will become a constant across police departments throughout the country.

“We have a warrior mindset that is taught, and it’s taught a lot … that our job is to enforce the law with zero empathy, zero compassion, zero understanding and the goal is compliance,” he said. “The goal of a police call is not compliance. The goal is whatever the point of the call is — a lost dog, stabbing, shooting, whatever. And so, I don’t like that warrior mindset. … I police because they allow me to and that’s not semantics. The consent of the community is how we have our job, and they have a say in how we do our job.”